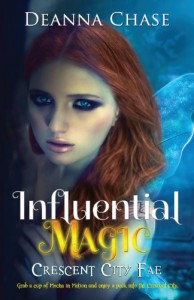 Looking for an interesting take on the paranormal world? A plot you can’t predict? A character cast filled with faeries and vampires and witches and…Links? Links??? What the hell is a Link, you ask? In short, an awesome furball of a creature that when threatened goes from a cuddly little lapdog into a raging wolf.

I want one. I’d even carry him around in one of those hideous little dog purses just so I could toss him at someone when they pissed me off.

In this book he has a pretty important job to do protecting Willow, our MC, who happens to be a faery, complete with shimmery wings and all. In the opening chapters she thinks she has life figured out. She owns a cupcake shop that sells magically infused sweets and treats, has a best friend named Phoebe that tells her everything, a douchebag of an ex-boyfriend named David that broke up with her out of the blue and with no given reason (the asshat) and the best friend of her deceased brother, Talisen, that…okay, so maybe she’s not quite sure about what’s going on there.

Since her brother passed away Tal has tried to step into that role for Willow but now things are getting confusing between them and lines are starting to blur. Then she runs into her ex and begins to realize that after a year of dating, she never really knew him at all. Add to this the fact that her bestie seems to be keeping things from her, her aunt wants to make her a rab-lat and someone is trying to kill her and…well, let’s just say things aren’t really what Willow thought they were.

I really liked a lot of things about this book. The world and creature lore were wonderfully built and full of minute detail without ever feeling overwhelming, the supportive characters were well developed individuals that brought a lot to the story and the pacing was pretty much non-stop. You never really have time to catch your breath while reading this because it’s one thing after another after another after another. Add in a plot that keeps you guessing until the very end and you have a recipe for a fantastic book.

Okay, so why the three stars?

First of all, I’d like to say that three stars from me is not a bad thing. It means I liked a book and I would conditionally recommend it. All recommendations to me are conditional as I don’t believe all people are cut out for all books.

What’s keeping me from giving it a higher rating is the main character. I’m pretty much the polar opposite of her in almost every imaginable way and so it kept me from being able to fully connect with her, which is no fault of the author’s. This might speak volumes about me as a person but Willow is pretty much your ‘glass is half full’ kind of faerie. I’m more a ‘the glass could double as a weapon if shit hits the fan’ type of girl.

Instead of sympathizing with her I was more confused by her behavior. While she thought she was crusading for the causes of good I thought she was begging for a rude awakening. She’s also…weak (to me). Because of her non-violent outlook in life she’s basically defenseless. Which is why she has Link! But then she leaves him behind and does something dumb like walk into a potentially hostile vampire lair to pick a fight with their master…

TSTL tendencies aside, I think a lot of people will relate to her so I fully recommend this book to all ‘glass is half-full’ subscribers and to those that can handle an MC in a paranormal genre that’s not your typical wise cracking bad ass. Even though Willow and I didn’t see eye-to-eye all the time I really did enjoy a lot of this book and look forward to reading the next installment.