Curse of the Scarab 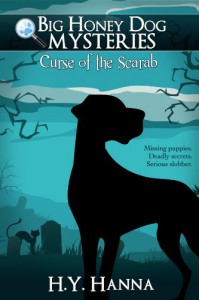 This book is adorable. It is sooo adorable. It was also a blast to read. Reading this was a lot like watching an old-school Disney movie like Aristocats. I could easily see this transitioning to the big screen and that’s not something I say very often.

In this book the dogs have human-level intelligence and their interactions, as well as Honey’s internal monologue, were part of what made this so much fun. They even have their own phrases like “Have you lost your tennis balls?”, “Oh, ticks!” and “For barking out loud.”

Adorable, I tell you!

The story opens with Honey’s master, Olivia, departing for a week and leaving Honey behind with an inept dog-sitter and an awkward, bumbling Great Dane puppy named Bean. As distraught as Honey is over being left with this misbehaving little interloper, she can’t help but feel bad for the helpless pup and soon takes her under her paw (SEE WHAT I DID THERE?). The mystery begins that very day, when Bean goes missing in the park. It seems that she’s the latest victim of a puppy-napper and Honey, with the help of her friends Ruffster the mongrel, Suka the Siberian Husky, Biscuit the bottomless pit of a Beagle and Tyson the ornery Terrier, try to get to the bottom of her disappearance.

I don’t want to give away too much of the story so I’ll just say that along the way they slip their leashes, prowl a cemetery, do a B&E on a pet store, try to decipher hieroglyphs and riddles, make peace with the king of the feral cats and attempt to keep Biscuit from eating himself into a coma, all while trying to avoid dogcatchers and scarab beetles.

HAVE I TOLD YOU HOW MUCH FUN I HAD READING THIS?

Not only was this book highly entertaining but there are some great messages in it. Hanna touches upon the irresponsibility and danger of puppy mills and the terrible treatment of dogs trained to pit-fight, among other topics. One of the stronger points she makes is that we shouldn’t judge a dog by its breed and that transcends fabulously into humanity and how we shouldn’t judge people based on preconceptions.

I’ve read a few books marketed for middle-grades or younger this year and I have to say that this is hands down the best suited for those ages. It just…fits. It really does. It’s not too lofty, not too silly, it has a great plot, some truly well-rounded characters (with more depth than what I find in most adult novels these days), a fantastic storyline and a climax that will keep you on the edge of your seat.

I highly recommend this for the ages it’s marketed to but really, I think that this book would be a ton of fun to read aloud to children, especially those that might not have discovered a love for reading yet. I think it’d be a great way to open a child’s imagination and expose them to the stories and adventures that can be found within the pages of a book.