Even better the second time around 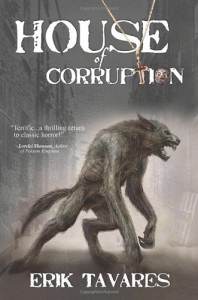 I read this book in hopes that it would be terrifying because I needed a reset in between those that I normally read. I came across it by accident, read the book blurb, and hoped it would fry the fluff from my synapses and give me the reset I so desperately needed. I figured it would be a quick, easy read with some grammatical errors and story-flow issues because it’s an independent pub.

The frigging thing is over 300 pages long and has fewer typos than books that come from major publishing houses. The story wasn’t full of holes or awkward perspective shifts like I had anticipated. It flowed smoothly and for such a lengthy book, it never seemed to drag. In fact, at times I hoped it would never end. It was…hypnotizing. Mesmerizing.

ERIK TAVARES, WHERE THE HELL HAVE YOU BEEN???

Welcome to my world, my new friend. If we ever meet in person don’t sign anything I give you, especially if I bring my own pen for you to use. Because while I’m smiling and rambling on and on about how much I enjoy your writing, I’ll be harboring ulterior motives of harvesting your DNA from the skin tags you leave on my pen so that I can clone you fifty times, raise evil genius minions of you and send them forth when they reach maturity to shift the balance of the paranormal literary world.

Okay, I suppose I should stop fangirling and actually review the book now. And while I’m tempted to do so with gifs, memes and jpegs full of happy dances, I’ll try to restrain myself.

Gone are the glittery vegetarian vampires with teenage angst and a propensity for hipster jeans and emo eyes. Gone are the shape shifters that have complete control over the animal side of themselves and hunt down deer to sake their bloodlust. Tavares rolls back the years to expose the ugly origins of myth and legend.

In House of Corruption, the monsters are back. And they want to rip off your head and walk around in your skin for a little while.

This book is Bram Stoker meets Anne Rice meets Sir Arthur Conan Doyle. There are elements of those authors within it but they’re mere hints, almost odes to what’s come before. You see Bram in the Van Helsing-esque Savoy, Anne in the beautiful, macabre, almost lyrical quality of the writing and Sir Arthur in the pacing of the mystery.

I’ve never come across an author that can make me see the stark beauty in every day acts like Tavares does. This book is so well written it’s almost distracting. Take the simple task of walking down a street.

Most authors say:
“I walked down the street.”

Tavares says:
“Colorful types still haunted the midnight streets of Chalmette: well-dressed patrons returning from ‘Orleans and its more dignified delights; clusters of sailors looking for another groggery or a woman to rent; street musicians of various skill and diverse color; fading conversations in Creole and English and Spanish. Gaslights burned in globes of moist, foggy air and pedestrians wiped at their slippery faces. Rain was coming.”

He makes you feel the moisture pressing against your skin, seethe dirt caked faces of street people, smell the decay and the refuse seeping from the alleyways and hear the drunken laughter chorusing from the surrounding taverns.

The first third of the book takes place against the back drop of the Spanish moss draped live oaks of New Orleans. It’s there that you’re introduced to the book’s narrators and supporting cast. The story is told primarily through five perspectives. That of a renegade priest, a werewolf, a kidnap victim, a murderer and a beautiful young woman. Unlike some books with multiple characters, you know who each person is. You know what they look like, their fears and their demons. You’re witness to the priest’s insecurity, the kidnap victim’s fear, the beautiful woman’s regret, the werewolf’s arrogance and the murderer’s reluctance, and you love them despite their pitfalls.

It’s also here that you realize that not only is this book beautifully written, but that it was painstakingly researched. I felt like I’d been plucked from my couch and dropped into the late nineteenth century. Everything to me felt period accurate, and though it was the obvious things that drew me in; the clothes, the news sheets, the dirt, the poverty and the superstition, it was the smaller details that really impressed me, the subtle way Tavares slipped in the intimate facts and histories of the places his characters passed through.

I encourage people to enjoy the relative “peace” of this part of the book because it quickly begins to descend into chaos as each of the narrator’s lives unravel in front of their eyes and the mystery begins in earnest.

From Nawlins you follow the cast to Boston, New York, Liverpool and Marseilles, where things go from bad to worse as the very creature they chase confronts them, taunts them and manipulates the authorities there into blaming them for its crimes, adding insult to injury.

Their final destination is the dense jungle of British occupied Borneo, where the sounds of the drums of the headhunters, the buzz of malaria laden mosquitoes and the rumbling of distant thunder leap off the pages. It’s here that the buildup of the story gains momentum and begins to crest.

During the last fifty pages of the book my eyes were so wide they nearly fell out of my head. There’s a dangerous canoe trip down a jungle river, a frantic race through abandoned villages and ruined monastaries, and then finally, the vines clear and a looming manor rises from the forest.

This is where you meet the real monsters. I won’t say much other than they are neck-rufflingly evil. They are sick, desperate, twisted, sad and all together too human for comfort.

When the book reached its climax, the words pouring out of my mouth didn’t even make sense anymore.

I just…I can’t even…